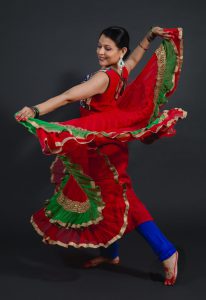 Mrs. Archana Thaker is the Founder and Artistic Director of the Aradhana Institute of Dance.  She is trained in the Kalakshetra style of Bharata Natyam and has been teaching Bharata Natyam as well as Bollywood and Folk Dances of India in the Indianapolis area since 1996.  Mrs. Thaker has presented several of her students in their Bharata Natyam Arangetram as well as numerous Bollywood and Folk-Dance performances. Aradhana students are renowned for their performances in the local Indiana Community.  Aradhana students have performed for Heartland Film Festival, Sangam–Lilly India Network, Indy 500 Parade, Indy International Festival, Indiana State Fair, Indiana Historical Society & Traditional Arts Indiana, Asian American Alliance, India Association of Indianapolis, Hindu Temple of Central Indiana, and Friends of the Pike Performing Arts Center. They have also performed for several non-profit organizations and local schools.

Archana has served on the faculty of the ‘Academy of the Gregory Hancock Dance Theatre’ and taught dances of India at the Summer Intensive Workshop for several years. She has also taught the Bollywood Dance Discovery Experience at the Center for the Performing Arts (Carmel, IN) which was featured in the Carmel Current.  Both these teaching experiences were a means of fostering cultural exchange between the people of India and the US through Indian Classical, Folk, & Bollywood dancing.  She has judged several events including National Dance Competitions such as Raas Royalty hosted by IU, Bloomington; Masti hosted by IU, Bloomington; Dandia Dhamaka hosted by University of Michigan, Ann Arbor; and Columbus Got Talent by CAMEO in Columbus, IN.

In addition to her deep learning and knowledge in the Dances of India, Archana received her degree of Bachelor of Science in Business with a major in Finance and a minor in International Studies from the IU Kelley School of Business. She also received her degree of Master of Business Administration (MBA) with a concentration in International Business from Butler University and currently works for Pedcor Companies as Vice President and Credit Officer. She has served as the Chairperson of the Board of Trustees of the India Association of Indianapolis (IAI) in 2007 and the President of the IAI Executive Committee in 2002 and 2003.